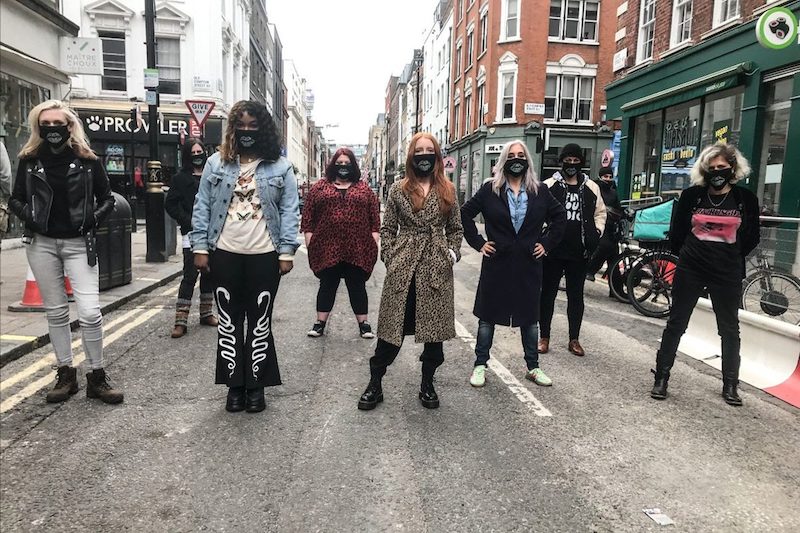 by Kimmi Watson , one of the 64 voices

“Every woman’s got a story”

When I was first contacted, in mid March, by Loud Women’s Cassie Fox, to see if I’d like to participate in a project for a song called Reclaim These Streets, I was more than delighted to have been asked. I was carrying a lot of anger and frustration raised by the killing of Sarah Everard on Clapham Common. I was not only pissed off that I didn’t go to Clapham because the official vigil had been called off, but even more pissed off by the reaction of the Met Police and mainstream media to her vigil, not to mention a resurfacing anger around violence against women that had not been so widely reported previously. I was in a rut music wise, my new songs as digital releases were mostly ignored, band rehearsals and gigs were off limits due to the pandemic and I was also suffering from lock-down/working from home inertia and felt like a caged animal. I badly needed an outlet!

“Calling to her sisters”

I welcomed the challenge of creating my own track and video clips for this moving and important song. I listened to the demo track, had a cry (hormones) and then set about the task almost immediately. Two vocal takes and a lot of messing around with signs and time-lapse videos later and I’d submitted my humble DIY efforts.  Pleased to have gotten a virtual “extra gold star” from Cassie for apparently being the first to contribute, I then watched eagerly as the project grew and grew and the involvement expanded to include some band members who’d played at She17 Shefest all day festivals (Iam Her, Naz & Ella, Deux Furieuses, I, Doris, Sulk93, Ich Bin Finn) and an Indianapolis based former Lady President member’s new bandmate (small world).  Then the project grew beyond my imagining to include some of my musical inspirations (Big Joanie’s Estella Adeyeri, My Bloody Valentine’s Deb Googe, Ros Cairney, Jayney Starling and Brix Smith).

“You are not alone”

Cassie also organised a session on Zoom for a group of us to sing along to the song. This really was a moving connection to the project and a much needed reconnection with our peers, just before the roll out of pre-release video footage with key singers and musicians who’d been involved in the studio recording sessions, in the days leading up to the release. Then Patsy Stevenson, the face in the media from the Clapham Vigil joined the project and then next…wait…what? Is that really Shakespeare’s Sister’s Siobhan Fahey, who when in Bananarama, was one of just four women to be in Band Aid?

“She was just walking home”

May 14, release day came and POW! There it was, the video, the single, the reviews, the push and collaboration to drive the climbing chart position. What a fine piece of work: Deb Googe’s undulating bass run downs, Charlie Stone and Jen Macro’s guitar licks, harmonics and riffs and Stevie B’s driving drum beat beautifully carrying 64 diverse and divine voices on a musical march to Reclaim These Streets and raise awareness and funds for Women’s Aid. I was reminded again of the powerful, evocative lyrics and in particular the words I’d chosen for my video placards, such as “She was just walking home.” and “You Are Not Alone.”

“Till every woman’s safe to walk on every street”

If we need a reminder as to why this single was released in support of Women’s Aid, who better to articulate it than the song’s writer, Cassie Fox:

“I wrote this song out of rage and frustration. Two women a week are killed by men. Refuge services are having to turn away one in two survivors of violence. And yet refuge funding has been cut by one quarter since 2010. This is a song of feminist solidarity and hope – all women and gender non-conforming people have a right to walk safely on every street, and be safe in their own home.”