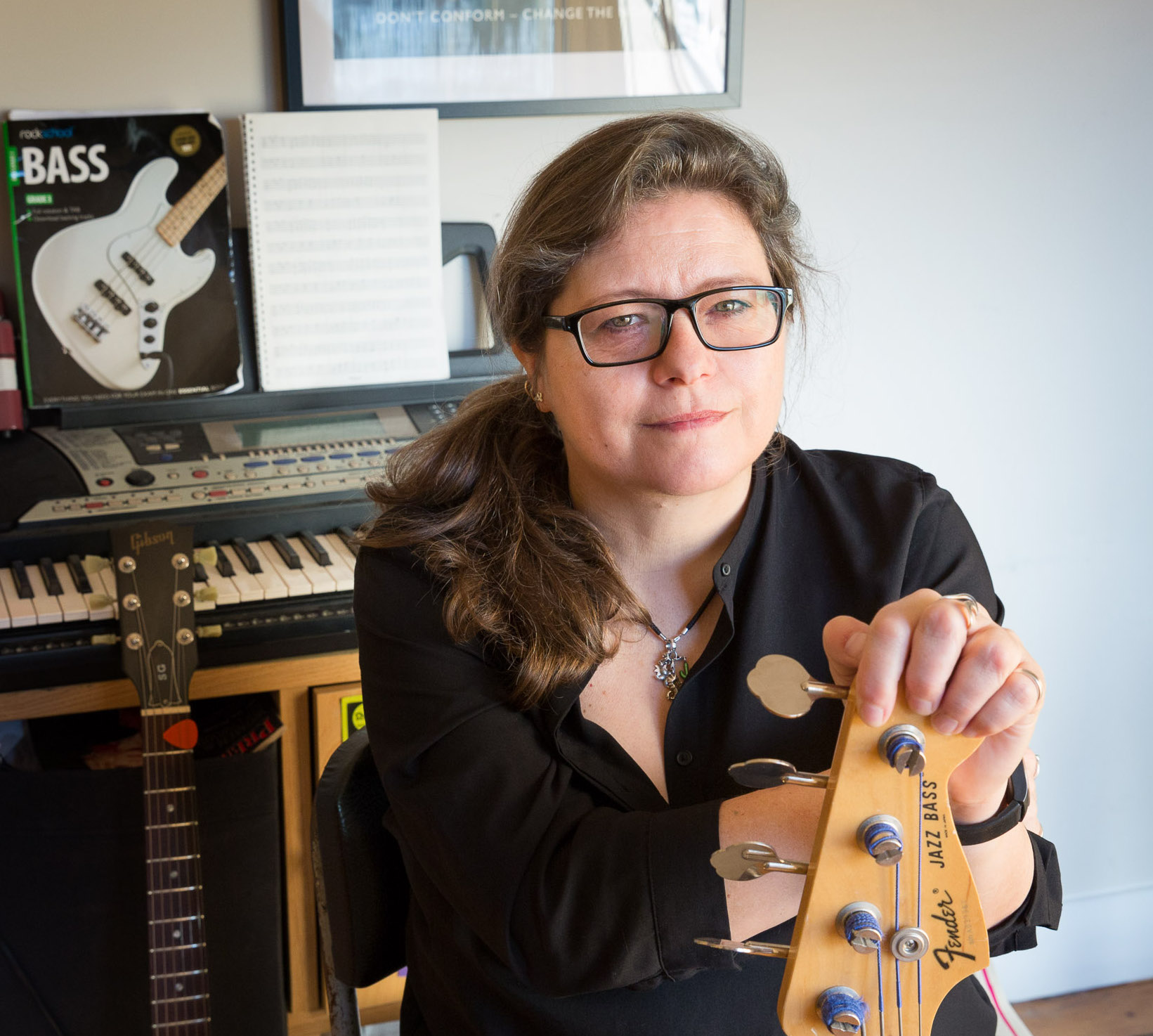 google-site-verification: google3e356cf6e4caddd9.htmlOur Founder Kimmi Watson was interviewed recently for the January 2018 issue of the E-List Magazine, by Adam Taylor.

Below is a transcript of the information she sent about She17 for the purpose of this feature. The final E-list article can be read here. Photo by Paula Smith Photography.

The brand was my brainchild and the name came about because we wanted to keep it local to our community, and the domain she17.com was available. The desire to do this came about after playing at open mic nights locally and singing in an all women choir and feeling so much more relaxed and confident about performing to other like minded people from the latter experience, but really wanting to play guitar again and so solo performances. There was a clear demand at the time, within my network of friends and colleagues for them (and their daughters in some cases) to explore and extend their singing, songwriting and musicianship in a safe, comfortable and supportive space.

About the She17 Team!: It is me and my life partner, and Sulk band-mate, Angie Hillcoat. Angie does the sound and vision (she is a graphic designer by profession working for a print co-ooperative) and I do everything else (booking venues, performer liaison, scheduling, bookings, all correspondence and all marketing and content – which lean to my professional background gained mainly from 25 years of working in the LGBTQi publishing and online media). I now work freelance for a women’s refuge charity that is based in Iran and for small independent feature film company, as well as doing music session and coaching work.

We do not rely on arts funding or grants at this stage in She17’s life-cycle. We initially set out to host 6 local events a year, including one each September as part of the Stowfestival.
This year in the absence of the Stowfestival we hosted Shefest at the Wildcard Brewery our first weekender!

The mission of She17 is to be a fun, welcoming and collaborative musical experience to build confidence and enjoyment from performing music live with other women, girls or non conforming folk, to a small, intimate and warm audience of friends, family and locals. All genres and abilities welcome just so long as it is live, female and acoustic.

AND ON MEN  There is a he in She17. E17 men folk can come along and watch too. We also occasionally programme bands with some male musicians, who are supporting front women. This is only at our festivals or bigger event

VENUES & EVENT FORMAT
We first booked the Red Room at the Rose and Crown,charged £1 admission and put on a show. It was packed and so was the next one there. We needed a bigger space but the theatre bar and theatre upstairs were too cost prohibitive. We moved to the bigger, more intimate and affordable Grove Cafe (in Hatherly Mews) and stayed there until September 2015, when it was taken over by Sodo Pizza. Returning to the main bar of the Rose and Crown of a We Shall Overcome fundraiser in 2015 and the Stowathon in 2015 and 2016 and still hiring the Red Room for our She17 Under teen events (which we did once or twice a year as fundraisers).

In 2014 we had Emily Barker headline our first Birthday event for our first and only ticketed event to date. For a list of ALL acts who have played She17 since our first event on 6 June 2013 visit: Wall of Fame

We’ve also put on some themed events at the WildCard at various stages between 2015, to 2017, we also held a couple of events at smaller spaces Hucks Cafe and The Wynwood Art District, before settling into a monthly event at the Wild Card, which suits us well because it is our local, has great sound, it is a flexible space with the right capacity, and the added bonus that the staff appreciate what we are doing and enjoy our shows.

We’ve held or been involved in a few fundraisers a year also for local causes. So far we have helped raise funds and awareness for Girls Rock London, Age UK WF, The Young Women’s Trust, E17 Migrants, Plan UK: Because I’m A Girl, Eat or Heat (Via We Shall Overcome) and Action Duchene.

In 2014 we scheduled and programmed an event as part of the Stowfestival called Shefest at the Grove Cafe. We did this again the following year and then in 2016 when Shefest3 was held at the Wynwood cafe. 2017 we ran our own festival as Shefest4 at the Wildcard as previously mentioned.

We have been a part of the programme with the Stow-a-thon at the Rose and Crown for past two years running in 2016 and 2017 and We Shall Overcome also in 2015 and 2016 (at the Rose & Crown and Hucks Cafe respectively).

We have never been asked to do anything at the Walthamstow Garden Party, but I did get to play there in 2015 with Lady President on the News From Nowhere Stage thanks to the Stowfestival team that year.

We’re also planning something special around International Women’s day possibly in collaboration with other local DJs and we will be scheduling our month events at the WildCard after this for 2018.

I’m also developing a songwriting workshop for local teens at present also for early 2018, as well as writing and recording new material.

Some facts about Kimmi as a local musician and links:

Bands
Have played in the band Sulk since 1993. Instruments: Lead vocals, guitar, harmonica and bass.
Sulk are a four piece and have been recently joined by Anna Shorten on percussion and backing vocals. We only gig locally and few times a year at She17 or at private events for friends and family these days.
We recorded an EP locally in 2015, called Ghost of A Girl, which we launched at Mother’s Ruin in January 2016. https://sulk93.bandcamp.com

Joined Lady President in Autumn 2014 after meeting Rebecca Jade and Anna Shorten via She17. Instruments: Bass, guitar, backing vocals and harmonica
Rebecca moved to USA last October so we don’t gig any more but Lady President still release recordings via an E17 and Indianapolis collaboration. Our recordings can be heard here: https://ladypresident.bandcamp.com

Angie and I also formed an experimental big band Mariache17 in 2016 after a She17 event at the Wynwood Cafe, but I became less  involved when She17 went monthly after Shefest this year.

Countess Bassie – Six String Bass and Vocal experimental project, which debuted at She17’s She’s Eclectic event in October. Recordings to follow in 2018, in between She17 events.

Session & Support work  Played bass for local covers band Viper from May to September this year also.Play bass sometimes (live and studio) for She17’s most frequent performer Sam Kurt, who I used to teach guitar to and used to accompany at open mike nights. Also played bass for She17 regular Sam Henwood once at The Victoria Pub.

Community (other than She17)
Co-Admin of Facebook Group Walthamstow Musicians and Twitter Page E17 Musicians with it’s founder Rebecca Jade (of Lady President).

Volunteered in 2016 for Punk Waltham Forest and Small Wonders Record store exhibition. As well as helping out at the exhibition, I audio interviewed some local residents about their memories of Small Wonders and Punk in the borough and also chaired a Q&A with Zilla Minx after the screening of her documentary This Is Punk Rock UK, at Highams Park Library.