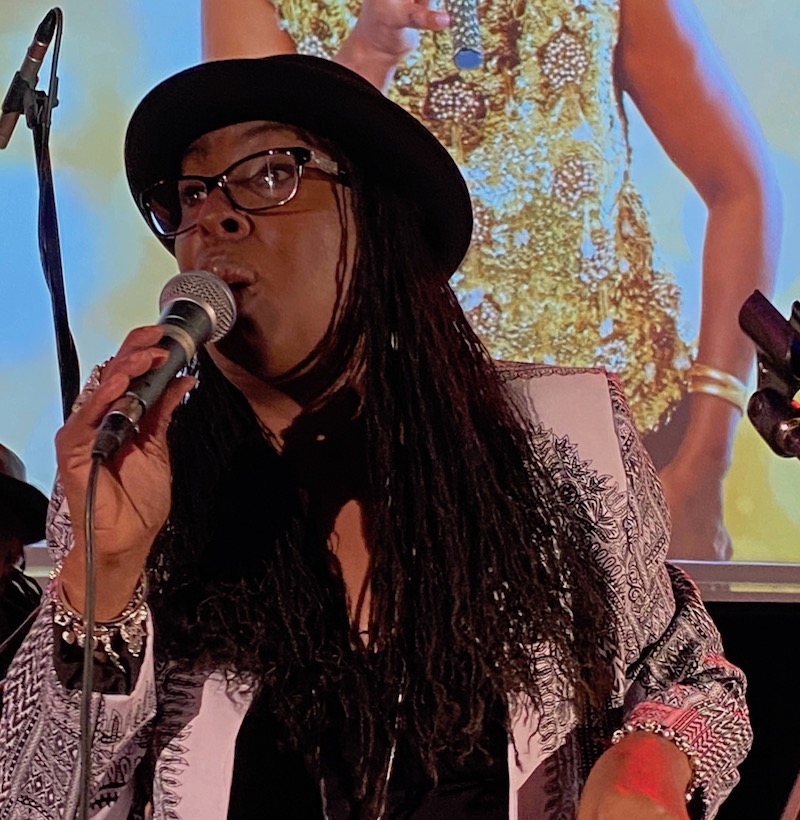 In June 1979 Janet Kay became the first Black British woman to top the UK charts with Silly Games, which Dennis Bovell (also of Slits – Cut fame), wrote, produced and released on Scope records. I still have my copy and was reminded of my own attempts at fifteen, to sing along into my hairbrush less than adequately to the B-side instrumental version suitably called Dangerous.

Fast forward another 41 years and the song has been exposed to whole new generation through Steve McQueen’s Small Axe made for TV series in the second episode called Lovers Rock.

On a balmy Thursday night, I went to worship this icon and witness a celebration of her 45 years in music as the Queen of Lovers Rock, at the Sanctuary (Greenleaf Road Baptist Church) in Walthamstow – a place of congregation and a new music venue enabled by the 2019 Borough of Culture funded Music Halls Project, whose aim is to bring live music the community. They certainly achieved that ambition on this occasion.

Pastor Dan firstly welcomed the packed house made up of members of his congregation, local families and friends, mostly women over 40 – a point the host for the evening actor/comedian Curtis Walker couldn’t help but bring to our attention in his warm up banter, which started with “Welcome to church and no swearing!” followed by some gags about Milli Vanilli miming and a Junior Giscombe song he had some influence over.

The diminutive Janet Kay then took to the stage and opened a night of powerful vocals, lovers rock. originals, soulful covers and nostalgic reminiscences with her first song from 1977 which was produced by the king of rock-steady Alton Ellis, a reggae cover of Minnie Ripperton’s Loving You. Next came her first original lovers rock hit Do I Love You? (1978) and then the Sugar Minott song You Bring The Sun Out.

The night’s first special guest performer was then introduced. Andy Abraham, who was an X-Factor final runner-up in 2005, blew us all away with his powerful rendition of Me and Mrs Jones and then dedicated The Love of My Life to his partner of 30 years.

Janet returned to the mike to sing Imagine That which featured (with Janet and her then band) in a bar scene in a 1981 film Burning An Illusion starring Victor Romero Evans and then sang her own 1978 song Feel No Way before an interval.

The second half of the show started with Janet dedicating Rock The Rhythm to all the ugly guys from those dark parties from back in the day.

She was then joined by her son Jaaziel Rakem, to perform a duet of Luther Vandross’s So Amazing, before being joined on stage by Nat Augustin for a duet of Atlantic Starr’s Always.

Then came the childhood nostalgia section of her show, with a crowd-pleasing version of My Boy Lollipop, followed by I Want You Back, The Rocking Robin and To Sir With Love with a reference to the impact of seeing Sidney Poitier on her TV screen as a young girl in the 60s.

When she performed her number 1 on Top of The Pops, JK was on the show with Anita Ward so Ring My Bellwas her chosen encore number and a great way to attend a great evening of celebration.

I left feeling the warmth, love and respect from the audience for this iconic chanteuse who still has her range and was carried home on a huge wave of childhood nostalgia, reminded of my love of ska and reggae music that her songs had inspired after my obsession with post Silver Jubilee punk. On which note, sorry your Majesty I won’t be celebrating your Platinum either, as I have just celebrated my queen!

Janet Kay is currently touring her show and has some original merchandise to celebrate her 45 years as the Queen – of Lovers Rock. https://www.janetkay.com/index.html